On Saturday, October 25, the Spirit of Service Scholars embarked on their first of five monthly day-long seminars that educate the Scholars in the contextual complexities of work in the public sector and expose them to an interdisciplinary network of the best minds in the state and nation. The seminar focused on immigration statistics, challenges, opportunities, and reform with emphasis on legislative impacts, US-Mexico border complexities, undocumented youth, as well as a broader global understanding of immigration from the refugee perspective.

The seminar started at the office of the Arizona DREAM Act Coalition (ADAC), a non-profit organization led by immigrant youth that aims to increase their access to higher education in Arizona; a state where discriminatory policies, such as Proposition 300, have made it tremendously difficult for undocumented youth to receive a college education. ADAC was started in 2010 by a group of undocumented college students, most of them from ASU, who decided to come out of the shadows, organize themselves, and advocate for fairer immigration and education policies. Since 2010, ADAC has empowered immigrant youth by providing them leadership and advocacy development opportunities, and running media and civic engagement campaigns to gain support for this cause. The ADAC has provided local and national leadership in the immigrant rights movement to advance the DREAM Act and comprehensive immigration reform. 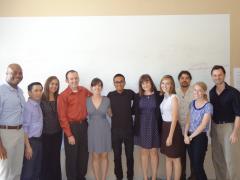 During that portion of the seminar, Scholars engaged with Dulce Matuz, ADAC's President, recognized by TIME Magazine's in their list of 2012 '100 Most Influential People in the World,' as she shared some of the work that ADAC is doing in the Arizona community and its impacts. Another ADAC founding member, Daniel Rodriguez, joined the Scholars later in the morning and shared with them his struggle to attend law school in Arizona as an undocumented student having to pay out of state tuition, and his successful grassroots fundraising efforts. Daniel was able to raise over $80,000 through crowdfunding to finish his law degree in Arizona. Daniel is also a past president of the Somos America Coalition.

Scholars also received a detailed introduction to immigration statistics, challenges, and realties through a DREAMzone training facilitated by our own Scholars, Katie Curiel and Anika Larson. DREAMzone is a comprehensive professional development workshop provided through ASU which provides student leaders, staff, faculty, and community partners with knowledge, skills and resources necessary to effectively respond to the presence and needs of undocumented students at institutions of higher education. DREAMzone’s primary objective is to create inclusive and supportive campus environments conducive to the educational success of undocumented students in response to the unmet social, cultural and academic needs of undocumented students at institutions of higher education.

Next, the Scholars learned about immigration impacts and community involvement from a local business perspective while eating an amazing lunch at Barrio Café. Established in 2002 by partners Wendy Gruber and chef Silvana Salcido Esparza, The Barrio was a dream come true for the duo -- a little neighborhood eatery providing authentic southern Mexico cuisine and original chef creations in an unpretentious atmosphere. The Barrio Cafe has been hailed as one of the hottest and original restaurants in Phoenix that is also very engaged in changing the larger community’s perceptions of the Latino community through the impact of the Café and their local community organization – the Calle 16 Mural Project. Barrio Cafe is located in the heart of Calle 16 Mural Project, a grass roots community effort to fund and promote a community mural project on 16th Street, Phoenix, Arizona that showcases the community’s voice through art/murals. The initiative was started as a result of the negative impact that Senate Bill 1070 had on the larger Latino community. 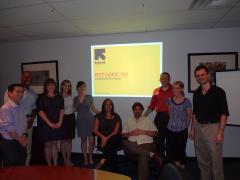 To end the day, Emily Taylor, Volunteer and Outreach Coordinator for the International Rescue Committee (IRC) in Phoenix, spoke to the Scholars on the history of the IRC and the broader picture of refugee care and resettlement in the US and Arizona.  The IRC was founded in 1933 at the request of Albert Einstein to assist refugees fleeing from Germany during the Holocaust.  It has since spread to more than 40 countries, offering lifesaving care and life-changing assistance to refugees forced to flee from war or disaster. The IRC’s expanded operations include not only refugee resettlement, but also emergency response, health programs, post-conflict development and a host of other programs depending on the needs of the community. Each year, thousands of refugees are invited by the U.S. government to seek safety and freedom in the U.S. Forced to flee conflict or persecution, many refugees have survived against incredible odds. Refugees step off the plane with next to nothing but their dignity, hope and determination. For the large refugee community in the Phoenix metropolitan area, the IRC helps refugees rebuild their lives by providing assistance with a range of needs including housing, food, English language assistance, legal assistance and community support.  We discovered that one of the Scholars had previously worked in the IRC’s urban farming program, and Emily fielded several questions about Phoenix’s other active programs and opportunities for Scholars to become involved, as well as provided information about the IRC’s 2013 statement on immigration reform.

The day’s events introduced the Scholars to community leaders and organizations in the grassroots, private, non-governmental (NGO), and private sectors, with both local and global focuses. The Scholars gained information, resources, and empowerment to understand some of the most pressing, historical, and timely immigration-related topics impacting Arizona that will help them lead a promising future for Arizona.  On behalf of the ASU Spirit of Service Scholars, we thank all of the colleagues and community members for their collaborative spirit focused on improving Arizona.